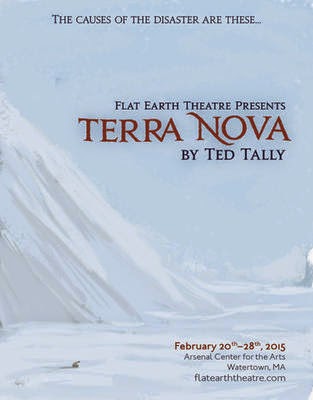 Because of my schedule, I was only able to attend the final performance of Flat Earth Theatre's recent excellent production of "Terra Nova."  So, I was not able to alert readers of the White Rhino Report about this worthy play.  But I am reviewing the play after it has already closed for two primary reasons.  First, I want readers to be aware of the work of this playwright.  Second, I want you to be aware of the work of Flat Earth Theatre so you can pencil in their two remaining shows that remain in their 2015 season.  "The Farnsworth Invention" by Aaron Sorkin will run June 12-27 at the Arsenal Center of the Arts.  "Radium Girls" by D.W. Gregory will run September 4-19 at Charlestown Working Theatre.

"Terra Nova" by Ted Tally tells of a doomed mission to the South Pole  by a team of Englishmen, led by Captain Scott.  Their goal was to beat the Norwegian explorer Amundsen to the bottom of the earth.  Amundsen planned to use sled dogs, eating them along the way as his crew's dietary needs required.  Scott smugly proclaimed that he would not play the exploration game by those rules, but rather he and his men would walk to the pole.

An excellent ensemble cast tells the story through flashbacks and hallucinations as the mission devolves and the men begin to lose hope and heart as the weather proves to be too much for them to overcome.  They finally arrive at the South Pole, only to discover that the Amundsen party has beaten them to the prize and planted the Norwegian flag.

Director Jake Scaltreto led a very capable crew of actors in telling this story in a most convincing and chilling manner.  The actors were:


I anticipate that the rest of the Flat Earth 2015 season will be as engaging as I found this play to be.  I look forward to "The Farnsworth Invention" in June, and look forward to having many of you join me in Watertown for the event.


"Captain Robert Falcon Scott, famed English explorer, has driven his team to the bottom of the earth. Patriotism and confidence urge them achingly forward through nature's coldest, most inhospitable environment in a harrowing race to be the first in history to step foot on the South Pole. Crestfallen to discover that a rival expedition has preceded them there, the British team retreats into Antarctica's bone-chilling world of suffering and sacrifice. Scott's tragic quest of pride and folly tells a human story of those who brave the elements, the lives they leave behind, and the hubris that drives them to catastrophe."