"Simon Says: A Dramatized Seance" by Mat Schaffer at the Plaza Theatre - Boston Center for the Arts Through March 14 - Don't Dream of Missing This Play 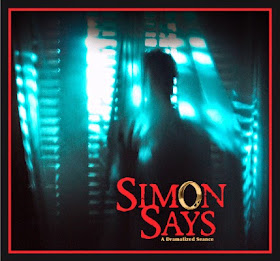 Under the taut direction of Myriam Cyr, a superb cast of three actors play out a dramatic encounter among a senior scientist, his protege, and a desperate widow.  The theme, as described below, deals with exploring the immortality and viability of the soul after physical death.  I do not want to give too much of the plot away, because there are harrowing twists and turns that are part of this delightful production.  What I will say is that if you have even a passing knowledge of the religious community of the Essenes in Qumran in ancient Palestine, you will be intrigued by how they figure in the action of this play which is set in contemporary times.

Ken Baltin strikes all the right notes as a clearly desperate senior scientist, hoping to finish his magnum opus and prove to the world his theories about the continuing existence of the soul after death.  In order to accomplish this task, he needs the continued cooperation of his protege, James, who somehow is able to channel an entity that calls itself Simon.

Anthony J. Goes is outstanding as James and as Simon, using a variety of voices and physical mannerisms to clearly differentiate among the parade of souls that take over his young body.

Brianne Beatrice is heart-breaking and vulnerable as the young widow who cannot pull herself together after the death of her husband in an automobile accident.  Her aunt has seen Professor Williston in a lecture, and encourages her niece to make the trip from Ohio to meet with him and James to see if they can help her find some peace in her prolonged grieving.

The relationships that develop among these three characters are fluid and varied, ranging from rage to hope and disappointment and wonder.  No matter what you may believe or not believe about reincarnation, this is a fascinating and compelling exploration of the topic, beautifully written and skillfully enacted.

There remain only a few more performances, so Simony Says to get yourself to the South End and the Boston Center for the Arts to see this Little Seer Production of "Simon Says.".

"For the past decade, Professor Williston has been studying James, a young psychic who channels an all-knowing being named Simon, in an effort to scientifically prove the existence of the soul after death. When Annie, a recent widow, comes to their home for a reading, events that occurred two thousand years ago will finally culminate in reunion, redemption and resolution."