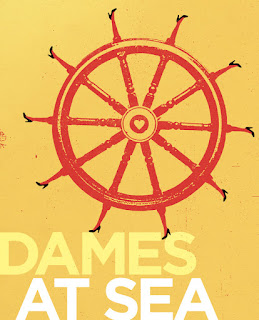 In a move to better reflect the broad regional base of their audience, Stoneham Theatre has renamed and rebranded themselves as Greater Boston Stage Company. They continue to call the Stoneham Theatre their home port, so it is fitting that the launch of the new season and the new name should be the wonderfully entertaining "Dames At Sea." This light hearted musical, with Book and Lyrics by George Haimsohn and Robin Miller and Music by Jim Wise, lovingly pokes fun at the 1930s era Busby Berkeley musicals and "42nd Street," in sort of a "Forbidden Broadway" light approach to parody. On a weekend when concerns about Hurricane Irma, the disappointing start to the Patriots' season, and continuing nausea caused by the miasma emanating from the swamp in D.C. had many of us feeling a bit down, this musical was a tonic for the soul.

This is a show driven by tap dance, so it is fitting that the Captain of this ship is Ilyse Robbins as Director and Choreographer. Her fingerprints and signature footprints are all over this delightful production. She has cast a wonderful crew of six to tell the story with their voices and with their feet. This sexy sextet pair off into three interesting couples - each couple emitting sparks of chemistry and sensuality. They are:

I cannot say enough about the tap dancing. Whether in solo sequences, duets, or full ensemble numbers, the tapping was precise and impassioned and always fully synchronized. The dancers were kept in synch by the wonderful twin pianists, Steven Ladd Jones, Music Director, and Bethany Aiken. Eric Levenson's Scenic Design brought us aboard a battleship docked at a pier in New York City. Costumes by Emily Taradash beautifully fit the nautical theme of the show, and Lighting by Chris Fournier and Sound by John Stone buttressed the efforts of the cast.

The precision of the dancing speaks to great training on the part of each cast member, and meticulous choreography and direction by Ms. Robbins. The show will run through September 24th. Dames - and Gents - I encourage you to book passage on the good ship "Dames At Sea." You will find it to be a pleasure cruise.