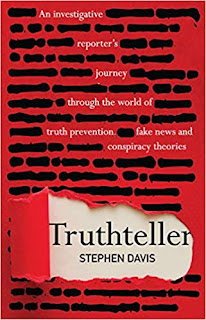 Stephen Davis is an investigative reporter who is uniquely qualified to comment on his observations from traveling the globe to track down truth in a variety of stories. His career has spanned TV, newspaper, and documentary film making. "Truthteller" is the result of meticulous research into the rapidly escalating proliferation of techniques and tools used to mount a war against truth.

Over the course of eleven riveting chapters, Davis lays out a case for an entire tool box of obfuscation tools being deployed by government officials, politicians, business leaders, and law enforcement. The epidemic goes far beyond the outrages against truth committed each day by the current POTUS. Davis offers examples from stories he has covered that range from Estonia, New Zealand, the UK, the US, and Antarctica. Chapter by chapter, he uses case studies to reveal  the tools of avoiding truth: character assassination, shooting the messenger, conspiracy theories, delay, hiding behind the cloak of government secrecy, fake news,

Davis makes it clear that because of the fast pace of the news cycle, and the diminution of budgets by newspapers and other news outlets, it is seldom possible to dive deeply into developing stories. As a result, those who wish to hide the truth find it much easier to avoid the spotlight of scrutiny,knowing that the news cycle will quickly shift to the next "if it bleeds, it leads" headline or sound bite.

The resulting book is a virtual manifesto and call to action - encouraging each consumer of the news to use discernment and wisdom in evaluating sources of information. He asks questions that beg to be answered:


The book is a must read for anyone who shares the concern of responsible citizens at the obvious erosion of truth and truth telling.